We tried to configure five RB-834s we ordered recently for use in E-Prime 2.0. After some fiddling about, we managed to get the experiment running on four out of five computers. The problem (outlined below) persists, however, with one of the five machines.

This problem, which was also encountered with the other machines, could be solved on four out of five computers by following these steps (with admin rights):

The SRBox then appeared under the heading Ports in the Device Manager.

After adjusting the port settings in E-Prime to match the Port indicated in the Device Manager, the SRBoxes worked in the other cases, but not for this one computer.

Note: The port, baud and cps settings matched those specified in E-Prime.

Thank you for contacting us directly regarding this issue.

Hi Jan, I just spoke with your colleague, but I’m posting an update here for the benefit of other forum visitors.

As best as I could tell, the response pad’s USB drivers are installed correctly. However, the PST drivers are not. The attached screen snapshot shows Windows’ Device Manager: 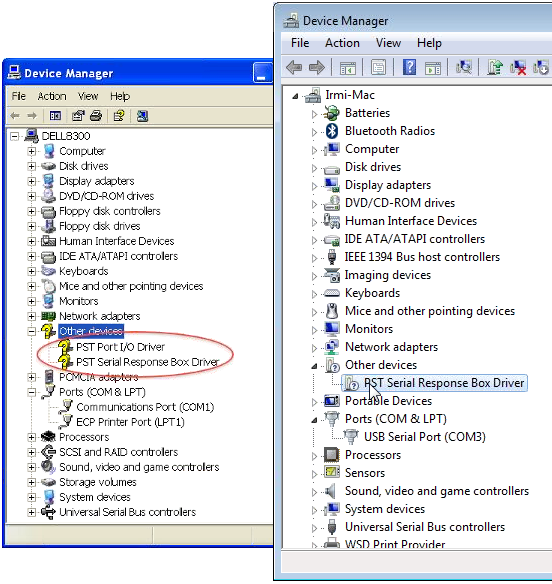 When the PST drivers are installed correctly, you will see two entries under the section Other devices, as shown on the left. On your colleague’s computer, there is only one entry, and it has a tiny question mark icon overlaying it, which indicates that it’s not installed correctly or that it is dependent on another, missing driver in order to work correctly.

I hope this helps.