I have downloaded SuperLab Remote along with my license and set up everything following the instructions on the website. But, after creating the package, I get the following error messages after unzipping SuperLab Remote: 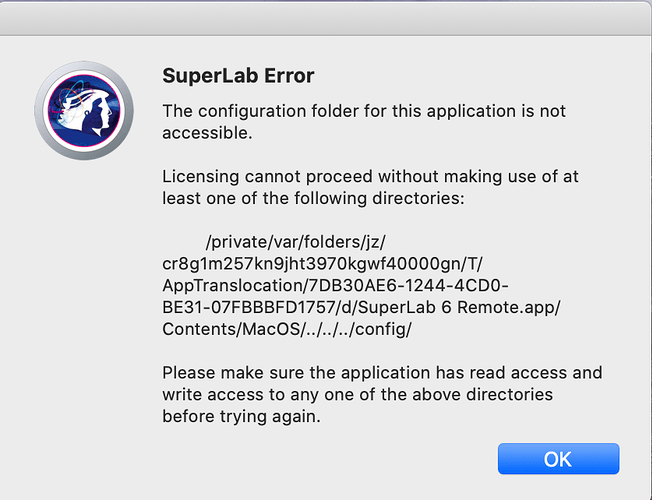 Any help would be greatly appreciated.

We’re looking into it, I’ll let you know what we find, hopefully on Monday or Tuesday.

Looking at the screenshots, two things:

But then again, you shouldn’t need to run SuperLab Remote directly anyway.

Let me know if you need anything else.

I followed your instructions. However, when I use another MacBook to open the zipped experiment, I follow the instructions as if I’m a participant (https://www.cedrus.com/support/superlab/tn1533_slremote_directions_mac_v6.htm), but get the same error messages. This means, as a participant, I have to double click on SuperLab Remote zipped folder and then click on the SuperLab Remote app to run the experiment. But, that’s when I get the error messages.

I created the SuperLab package on OS Catalina. I tried to run the experiment on a MacBook running OS Mojave.

It would make sense at this point to use screen sharing. I’ll email you my address.

Hello, I am new to this forum and have just started testing out Superlab Remote. I am having the exact same issue as this post. When I try to run as a mock participant on a separate computer, I get the same error windows this person posted. What is the solution to this problem?

I’m guessing that you are on a Mac as well?

We’ve updated the participants instructions on Mac page to add the following:

Alas, this is an Apple security feature and there is no way at present around this additional step.