I am new to SuperLab, but I am hoping that it will be able to carry out what I need it to do.

My experiment requires participants to listen to rhythmic sequences and discriminate amongst them, which I have created as .wav files. In each trial, I need Superlab to randomly choose from a list of audio files and play it twice, then either play it a third time or play a deviant (which simply means a different rhythmic sequence). The participant then has to determine whether the three sequences that they just heard were all the same (by pressing “s”) or if one was different (by pressing “d”).

If the participant chose that one sequence was different, then they are asked which sequence they thought was different (“1” for the first, “2” for the second, “3” for the third).

There are 30 trials in total. Half of the trials will have that deviant sequence and half will simply be the same sequence repeated three times.

To add another layer of complexity, the rhythmic sequences fall into two conditions: “Simple” and “Complex”.

I have imported the rhythms as four Stimulus Lists:

To make it even more confusing, the deviant rhythms cannot be randomly assigned to any principle sequence - They have specific principle rhythms that they match with (named appropriately).

If this program is not able to carry this out, I wonder about having to ditch the computer randomization of deviant sequences and creating .wav files that contain the repeated principle and deviant or three times repeated sequences. From here, SuperLab would only need to randomly choose one of the 30 sequences and continue to present them all until there are none left.

Any suggestions or pointers would be extremely useful. I admit that I am new to this world - This is my undergraduate thesis experiment. I hope that my description made sense. 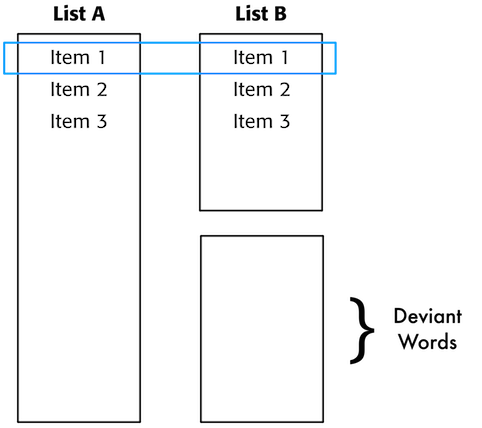