This program written in Superlab 4.0 is an abbreviated example of a concurrent chains experiment that I’m doing with pigeons. The procedure is as follows: they get a “start cue” first which they must peck to let me know where they are in the cage. Then they get a choice between left and right stimuli (each is a black square with a gray dot in the middle). If they choose left, they get a series of randomly-placed images of a baseball. If they choose right they get a series of images of a similar baseball that follow a pattern on the touchscreen (ABCDE). Once in awhile they get a reward (blue-border around the image).

What can I do about this? Essentially, I want to turn off all incorrect responses except the one that is associated with the right stimulus.

As of right now SuperLab can have a correct response and then everything else is considered incorrect. However we have a new release, SuperLab 5, coming out in the summer that will fix your issue.

I appreciate the information.

This is now possible with our new release of SuperLab 5. Below is an image that shows how this is implemented within the Participant Input editor. 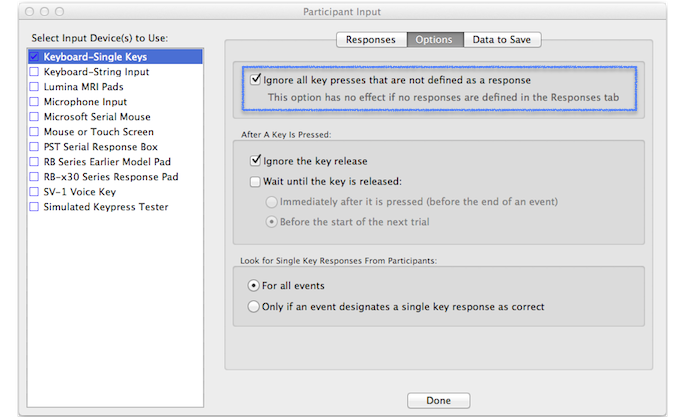