Embed other programs in SuperLab

as I just found out that it doesn’t work (yet):

it would be great if one could make SuperLab start other programs (such as browser games for filler tasks) in between trials and automatically return to the next trial after a specified amount of time.

Embed other programs in SuperLab…

I second this request!
The lack of this feature is currently the only reason that is keeping me from wholeheartedly purchasing multiple SuperLab licenses for my lab (compared to another software package that does have this feature).
Thanks.

Hi Jason, launching an external program is not in our immediate road map. Nevertheless, I’d be grateful if you can tell me what your application is to help us understand the requirements.

Embed other programs in SuperLab

Thanks for the quick response Hisham.
Pertaining to your query: I conducted a few experiments using another similar experiment software in which participants were hooked up to a fake lie detector, filled out some initial measures, and then were given a “test” to see if the lie detector was “working”. Immediately after the test (which was in the experiment software), the experiment software brought up a different program that was a sound wave editor with a sound file already loaded. It looked really fancy & complex and the participants were told that this was the output of the lie detector. Then the researcher closed the sound wave editor program and the experiment software continued with the rest of the measures. I realize that this “lie detector output” could just be shown as, say, an image file within SuperLab, but having the separate software automatically pop up from the “normal” experiment software made it seem much more legitimate.
Perhaps some sort of macro could accomplish this? (Where it runs SuperLap part 1, then the wave editor, then SuperLab part 2?) With that it mind, does SuperLap work with command line options where participant information (e.g., participant #) can be automatically included (from, say, a text file) so that the researcher doesn’t need to type anything in while the participant is there? I’ve looked for documentation relating to this and I’ve only come across a few forum discussions.
Thanks!

Thank you for explaining your experiment, I appreciate it.

Yes, SuperLab can accept some command line parameters. They are not well documented; here is a screen snapshot that describes them. 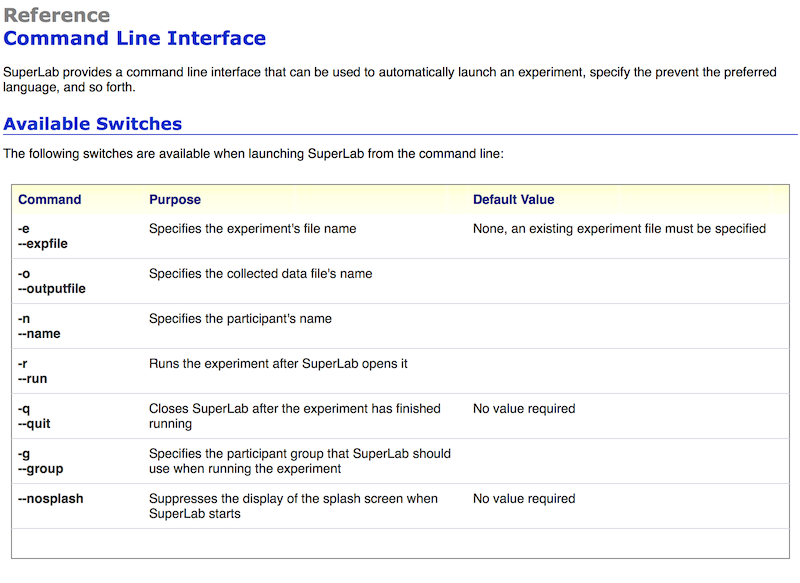 Thanks for the information!